In today’s digital culture, we encounter video as the general format of moving audiovisual images. Taking a holistic look at the From Below series, Sidar Bayram discusses the different video works against the backdrop of the shifting roles video has played as a form of expression since the 1980s.

Watch the videos of From Below series here

Almost 40 years have passed since the so-called video revolution was first hailed around the globe and in Turkey. The recording possibilities offered by video technology enhanced the audience’s mobility vis-à-vis the content and social time imposed by TV broadcast streaming. As it became easier to record and store audio-visual images and to assemble and reproduce them in various ways, this triggered an explosion of images and sounds the impact of which are still felt through different media today. The single-centered and unidirectional structure of TV and its dominance in the visual field were relatively eroded. In the years that followed, video cassettes started to record and preserve not only TV broadcasts and video content but also daily life.

Particularly since the 1990s, video records showing different daily life experiences and social developments from different perspectives have played an important role in cultural and artistic production as well as in political disagreements and conflicts. Perceived as the most direct and reliable means of recording and transmitting reality, video serves as an important means of documentation and archiving. Bringing together different activities such as documentation, investigation, and archiving, audio-visual images are also intertwined with historical, aesthetic, cultural, and political dynamics. In today’s digital culture, no longer depending on material technological elements like cassettes and recorders, video has become the general format of moving audiovisual images.

THE INSIDE/OUTSIDE OF THE FRAME

The video-essays in the From Below series bring up a variety of issues, including social struggles, image politics, collective memory, visual archives, and surveillance practices, meanwhile also allowing us to reflect on video’s aesthetic, cultural and political potentials. In this respect, the notion “from below” indicates more than a simple change of position or perspective: It ponders the very question of how an attempt to look at the world, society, and politics from a different perspective can make different worlds visible, thus putting up for discussion the ways in which video is able to transform dominant ways of seeing and social frames as well as the order and meaning of the social stage.

Focusing on the photographs of the Migros warehouse workers taken during their strike, Yan Yana (Side by Side, Aylin Kuryel) uses the voices and narratives of the workers to animate the otherwise still moments captured in the frame of the camera, thus expanding the frame to render visible not only the sequence of events that gave rise to those moments, but also the different layers, emotions, and encounters within the frame. Thus, the photograph showing the protesting workers in front of their tent, which they set up in front of the Anadolu Holding building, also tells of the preceding 9-hour struggle to set up this tent as well as of the determination and joy that is about to prevail. İsimsiz (Untitled, Deniz Buga), on the other hand, uses sound not to amplify and add more to depth to images, but to contrast them. The montage of the video, in which images from the seaside in Tarabya (Istanbul) are accompanied by a parliamentary speech on ecology, tries to produce a narrative and meaning that is embedded in the seemingly incompatible unity of image and sound. In Gözün Üstümde (Looking Back at Me, Aylin Kızıl), sound works to inquire into images’ capacity to express and convey social trauma. The blurry images that gradually become clearer and the frames that are completed piece by piece are accompanied by questions regarding the relationship between seeing and looking and the extent of what video can tell.

The conditions and power relations that give rise to images, though not directly visible, are nonetheless part of the images. Some of the videos in the series show that the sociopolitical dimensions of the images cannot simply be reduced to what is recorded in the frame. Considering the images of any event together with the image event that produced them enables us to move between the inside and the outside of the frame. As an important tool to traverse different images, narratives, perspectives, and view them together, video is one of the dominant elements of today’s image politics.

Focusing on the protests at Boğaziçi University, Tanık (Witness, H. Işık) uses video to create space for different forms of visual and personal testimony by putting together various image formats and narratives about the resistance. The protest images that flash up during the stroll around the empty university campus and the students’ accounts of their experiences not only inscribe the protests into the university space, but also point out the contradictions and debates between the subjects of the resistance.

Atlas (Osman Baran Özdemir), another work dealing with the protests at Boğaziçi University, brings together different pieces of image and sound recorded during the protests, looking at different aspects of this collective activism through various gestures, hands, cameras, recordings, crowds etc. Kadrajın Dışı Yok (Nothing Outside the Frame, Oktay İnce) reflects on camera ethics in the public sphere in the context of the contradictions and power relations inherent in the practice of recording. As the camera navigates the streets, passing animals, people, protests, and police vehicles, video’s ethical, aesthetic, and political dimensions are addressed in terms of perspectives, shooting techniques, power practices, and emotions. How can we include video in our thinking? How do we approach video action? What is the relationship between images and power techniques? These are some of the important questions thrown up by this interrogation through video.

Media technologies in general and audio-visual technologies in particular have a multi-layered history which is closely intertwined with the techniques of power and war. The realm of social conflicts and antagonisms and the audio-visual sphere often tend to intersect. Visibility and detectability largely imply controllability and vulnerability.

Consisting of three short videos, Merhamet (Compassion, Halil Yetiş) focuses on hunting to draw attention to the relationship between recording and capturing, that is, between being caught on camera and being physically caught. Demonstrating the dominant role played by detection and tracking devices like binoculars, drones, and radios in hunting, the video essay underscores audio-visual practices’ relationship with violence, conflict, and domination. Gözüm Üzerinde (I Am Watching You, Zeyno Pekünlü and Tatlıhan Tuncel) adopts a similar approach, albeit in a completely different field, to examine how our online activities are tracked and how this personal data is used. In the video Pekünlü displays a data set she created by taking screenshots of the Facebook ads she encountered in her feed, pondering how the online traces of our daily lives can become the raw material of not only advertising but also different manipulation strategies.

We can consider this effort to watch those who watch and record those who record, both with the camera and through social media platforms, within a wider political cultural transformation. In visual as well as in cultural and political terms, the shifting of frames from angle to counter-angle can spark new fields and struggles. The forensic practices employed by states and companies to record and control the criminal, the oppressed, and the dissident have acquired a counter-forensic character in today’s human rights politics. For some time now, Bellingcat, Forensic Architecture and similar research institutions have been creatively using the ruling powers’ audio-visual technologies of detection and destruction to document and prove the destruction they have caused. Both in terms of the data sources and investigative tools they use, and their methods of addressing the public, these counter-forensic practices rely on audio-visual technologies and practices. Taking on the ruling powers and confronting injustices therefore has essentially become an audio-visual issue today.

In addition to questioning and investigating power relations, video also allows us to look at and reconstruct history and to reinterpret archive records. The work Gündem (Fatma Çelik), which deals with the newspaper Özgür Gündem, searches for the latter’s visual traces in archive records and fictional films. Together with the narratives of the distributors, these records, edited in parallel with the ordinary newspaper production process, present an insight into the extraordinary history of a daily newspaper.

Based on war camera footage from the Syrian Archive, the video-narration Hasan’ı Beklerken (Waiting for Hasan, Alper Şen) tells the imaginary but likely story of a sniper waiting in the trenches during the war. As a non-human archive record turns into the stage for a humane contemplation of the gravity of war, Şen succeeds to illustrate how archive images can be utilized to render different narratives and moments visible. Merkez (The Center, Deniz Tortum & Esen Tan), on the other, instead of reinterpreting and making a story out of archive records, focuses on the story of the controversial film archive in Sami Şekeroğlu Cinema and Television Center at Mimar Sinan Fine Arts University. While keeping a visual record of this archive, which bears the traces of audio-visual history, the 3D-camera’s journey through rooms, corridors, shelves, and reels also reminds us of the spatial and material dimension of archives.

In the last few years, especially in the face of ‘deepfake’ technology, which makes it possible to produce fake images by changing a person’s face in a video or what they say, it has been argued that the era of video had come to an end. This profound questioning of video’s relation to social reality comes at a time when social media platforms, authoritarian populism, and the rise of reactionary cultural values shake the foundations of truth to leave it depreciated. These conditions also limit the possibilities of the ignored and neglected to produce their own images and voices, to convey their experiences, and to put forward truth claims. In such times, the works in the From Below series prompt us to rethink video’s role in seeing social struggles, looking at violations, investigating power relations, focusing on unknown histories etc. Of course, it cannot be claimed that video or any image would simply contain truth in a self-evident and obvious manner. As Oktay İnce says in his video, truth is between images, in relationships, in the montage. Images mediate the truth, they transport its call, making it visible and audible for an instant. The effort to heed this call is grounded in the social relations – between the recording and the recorded, between viewers, editors, artists, advocates, etc – that make the images possible and that are created around those images. It will need a collective effort to construct social relations that establish the connection between images and truth. 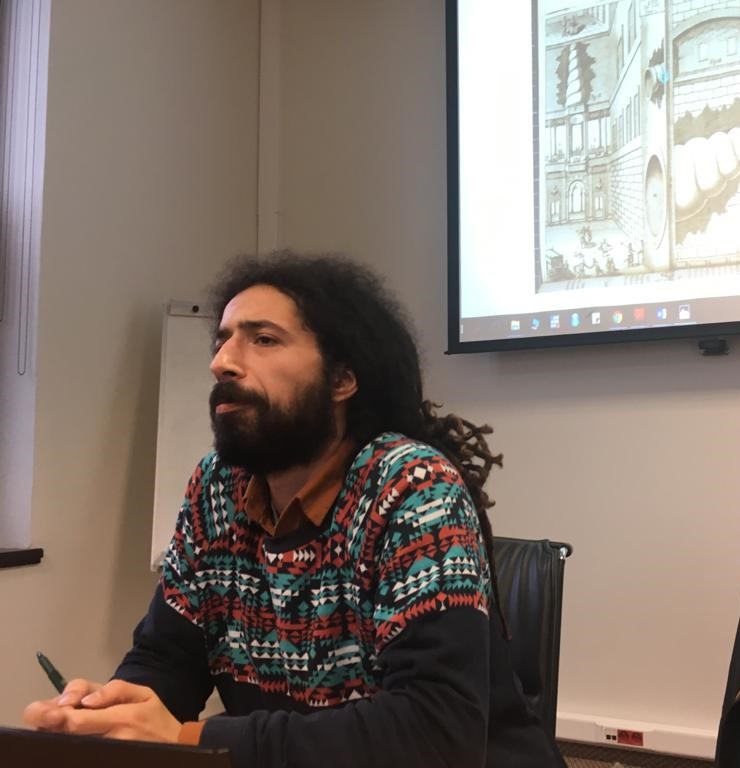 What is ‘From Below’?