Dicle Anter (the son of Musa Anter, a prominent Kurdish writer who was murdered in 1992) managed the Yılmaz Güney Movie Theater in Batman for years. He was sentenced to two years and one month in prison for “disseminating propaganda for a terrorist organization” with regard to the screening of a documentary in 2015.

In this piece on the Yılmaz Güney Movie Theater, which was opened in 2005 and burnt down in 2017, he states that the venue is “like the history of an era in itself”. Police presence at screenings, the dismissal of elected mayors by the government, a cinema burnt to ashes, prison sentences… Anter recounts. 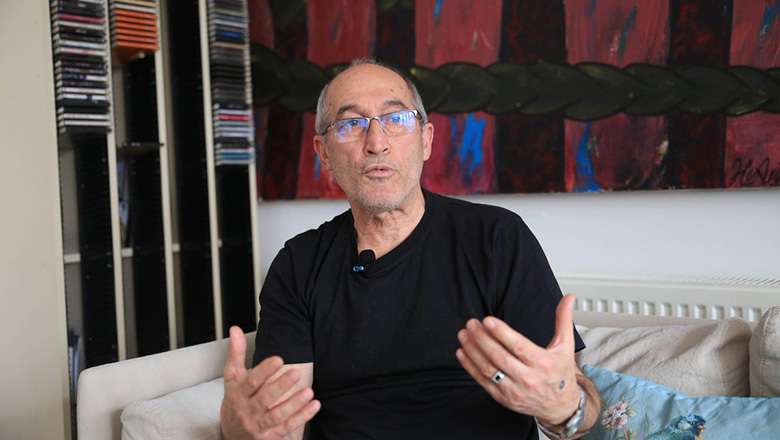 The Yılmaz Güney Movie Theater was opened to public use by Batman Metropolitan Municipality at the Batman-Hasankeyf Cultural Festival in 2005. Functioning as a major venue for social activities since the very first day, the cinema became a common space for a lot of people, still cherished by many today. It is indeed a common memory space for visitors from and outside Batman.

Since the day it was opened, a lot of documentaries, independent films and European films were screened in the cinema, where successful and significant festivals were organized, as well. The venue also hosted plays, panels and concerts. Most importantly, it enabled children to meet cinema. Children from nearby villages experienced the joy of coming to the cinema for the first time. The sentence “Teacher, what a big TV!” still echoes in my ears. Of course, bringing children to the cinema was not that easy. We witnessed teachers being denied permission by the Directorate of National Education to take their classes to the cinema. For instance, they were asked, “Why do you take them to the Yılmaz Güney Movie Theater? Take them to other cinemas,” and eventually film screenings for children began to take place in the conference halls of the police headquarters. Later on, there was even more pressure and stricter control on the activities organized in the cinema.

Years after its opening, as the need arose, the Directorate of Culture at the municipality issued a decision to renovate the cinema. However, in 2016 the elected mayors of Batman[1] were unfortunately dismissed by the government and a trustee was assigned to the municipality, resulting in the suspension of the renovation. During that period, the cinema was closed. And later, as everybody knows, the awful fire in 2017 burnt the cinema to ashes. The cinema was like a second home to us; our hearts still sink when we pass by the place. 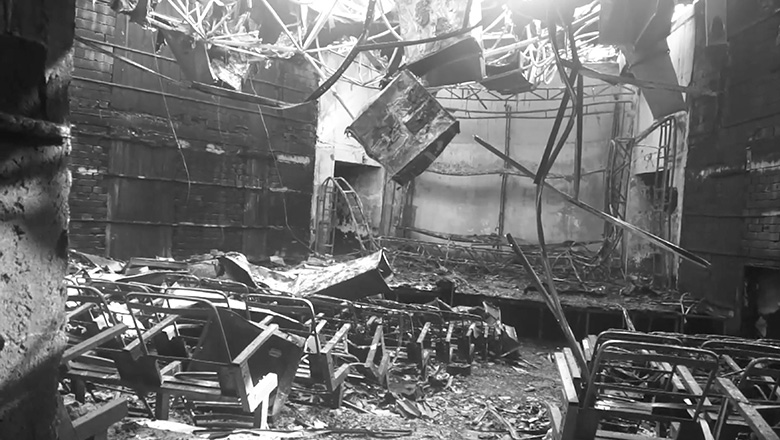 The Yılmaz Güney Movie Theater in Batman was burnt down on January 30, 2017 due to “electrical fault” according to the official statement (Photo credit: Emek Bizim İstanbul Bizim).

Upon being assigned to duty, the trustee decided to construct a new cinema, even put up posters showing what it would look like, and while doing these, interestingly, held a referendum asking the question: “Should we build a cinema or mosque in the place of the former cinema?”. They stepped back when 80% of the public voted for the cinema, and finally, they gave up the idea by declaring that there wasn’t enough budget. After being re-elected in the local elections of 2019, Peoples’ Democratic Party (HDP) decided to build the cinema in its original place, but the mayors were dismissed once again and it brought everything to a stop.

I’ve mentioned that the cinema hosted diverse types of activities alongside increasing pressures, some of which I witnessed first-hand, as in the case of police tearing down the poster of Democratic Society Congress (DTK). We screened a lot of documentaries and held premieres at the festivals. All the screenings were recorded and inspected by the police. Sometimes, we would go to the police to give statements for some films. The premiere of the documentary Nûjin (New Life, 2014) was held with police presence in the Yılmaz Güney Movie Theater. Recordings were made and there was no problem at all that night, but years later, in 2017, the director Veysi Altay and I were sued. In 2019 the court decided; Veysi got a prison sentence of two years and six months, and I was sentenced to two years and one month. We were also banned from leaving the country. The case was taken to the court of appeal, and a few weeks ago, the court of appeal sent a notice declaring a decision of reversal. The case started again on June 16, 2020. The documentary was released five years ago, in 2015. It has been screened in many places and received awards, but interestingly, a suit was commenced only for the screening in the Yılmaz Güney Movie Theater. In the same year, the documentary Bakur (North, 2015) was also screened there. The film’s directors Ertuğrul Mavioğlu and Çayan Demirel were sued for the screening, I was asked to give statement and the case has not been concluded yet.[2]

There is so much more to tell about the Yılmaz Güney Movie Theater. It is like the history of an era in itself. It is a collective memory as well as being the mirror of the society. It is one of the nicest memories of Batman and I’m sure so many people have memories of this cinema to share.

[2] Editor’s note: The directors both got a prison sentence of 4 and a half years. The Court of Appeal re-examines the case.